Last week we played through the story of Joseph, which is essentially the story of God leading his people to Egypt. Time past, and a new Pharoah came to power who did not know Joseph. He feared the Israelites as they grew in number, so he enslaved them. But God had a plan. He did not forget his people. He would deliver them, and in doing so cast a foreshadowing of his plan to rescue the whole world from the slavery of sin.

A Baby in a Basket 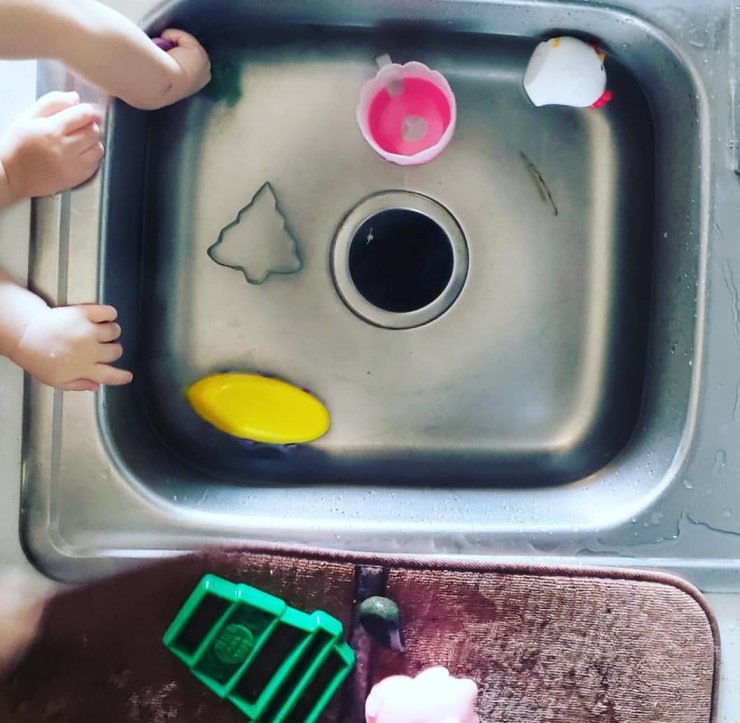 Moses was the man God would choose to lead his people to freedom. He was set apart in the beginning. When Pharoah made a decree that every Hebrew baby boy was to be killed, the Hebrew midwife refused. This made way for Moses to be born. His mother hid him by placing him in a basket and floating it on the Nile. Pharoah’s daughter found the baby and adopted him. We played through this story by exploring the words float and sink, because Moses floated on the water.

Blippi has a great video showing the experiment, and offering vocab to use with toddlers (Spanish: Flotar o Hundir). 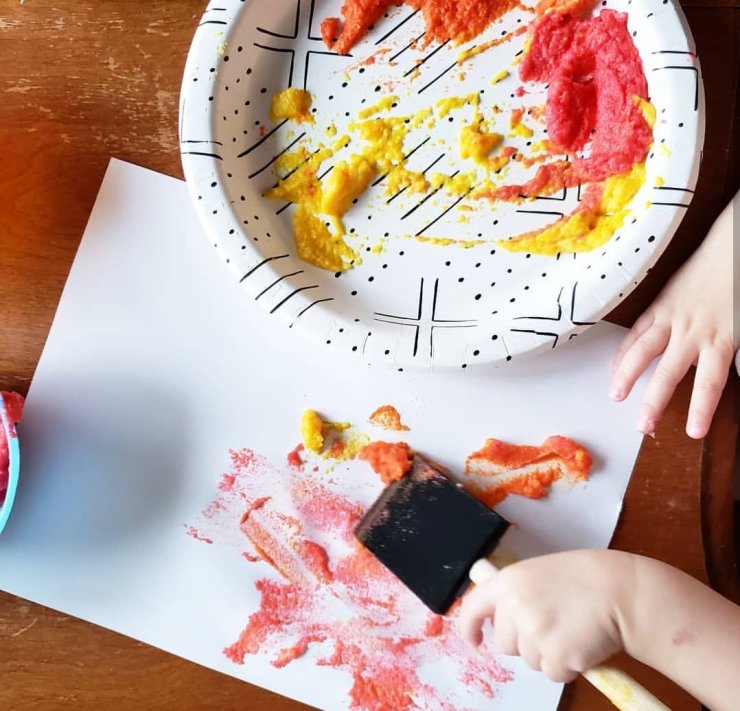 God called to Moses through a Bush that was on fire, but did not burn up.

We used edible finger paint to paint with fire. 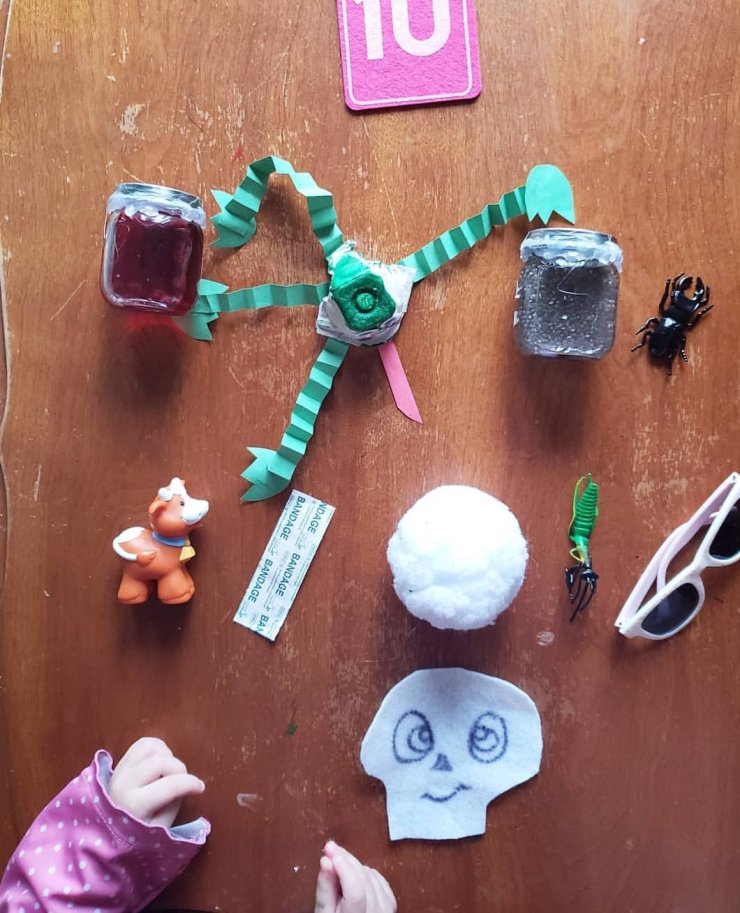 When Pharoah hardened his heart, and refused to let the Hebrew nation go, God released plagues upon Egypt. We explored the plagues using a discovery bin filled with different items to symbolize each plague. 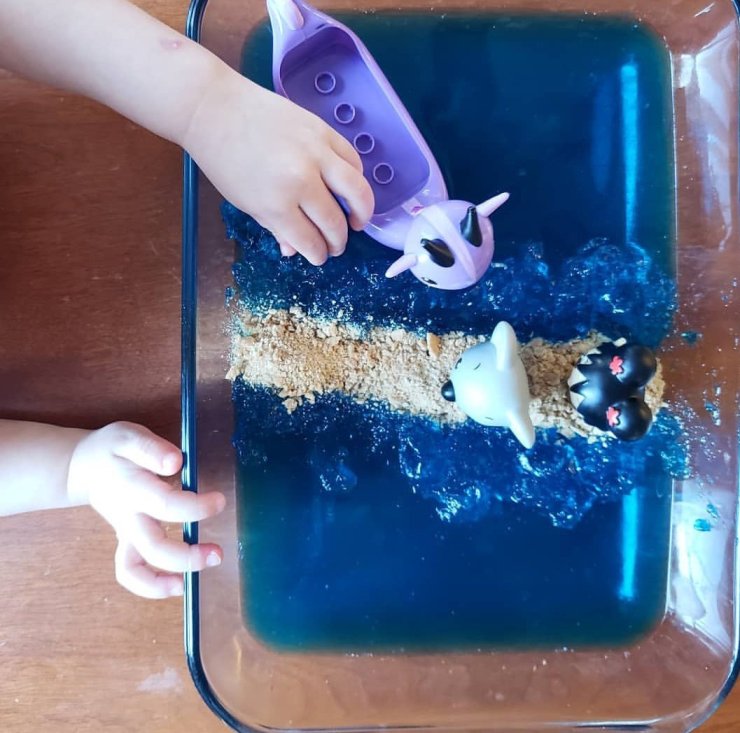 Finally, Pharoah released God’s people. However, before they got too far, Pharoah changed his mind. As they approached the Red Sea, Pharaoh chased after them. They had no where to go, but God had a plan! He parted the waters for the people to walk on dry land. And when they had reached the otherside, Pharoah’s army was swallowed up by the sea. God saved the day.

To play through this story we used a small world bin. Pro-tip: this gets messy, so put down a tarp, or play in the bath tub. 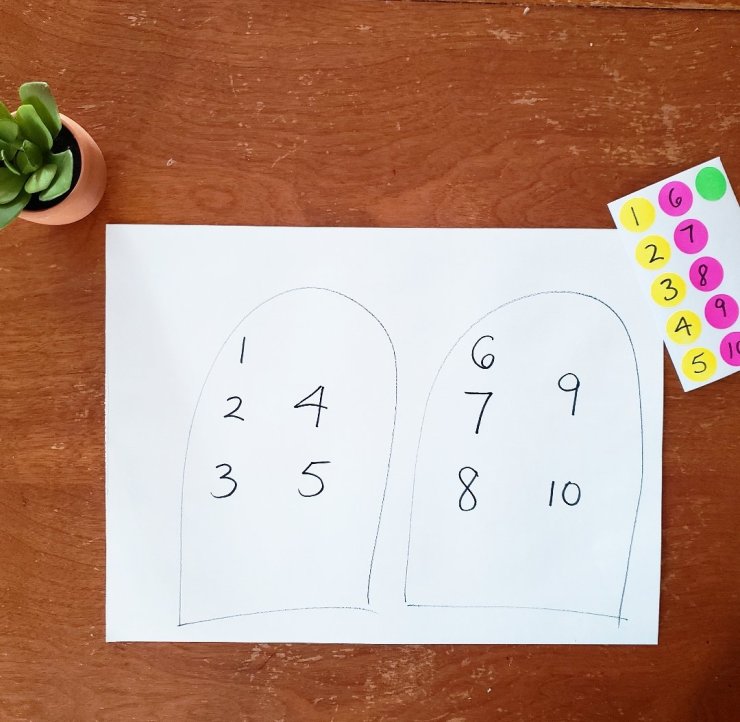 Finally, closing up our lessons on Moses, we learned about the 10 Commandments, also known as “10 Ways to be Perfect” from the Jesus Storybook Bible. We read the story of the 10 Commandments, as well as watched the Slalom Sesame version (a great option for Sesame Street fans). Then we did a simple number-matching game.

This week we watched Veggie Tales: Moe and the Big Exit (Spanish: Moe y el Gran Escape). I love this episode, because it brings the story dow. To a level small children can comprehend.

We also listened to the Jesus is Better Podcast by Alicia Yoder (Episodes 1-6). This podcast is so full of Gospel truth that both parents and little ones need to hear. We listen at breakfast with Vale (2.5) and she is fully engaged, and I leave feeling encouraged by the simple messages that show where Christ is in the story.

This story always amazes me with the symbolism and foreshadowing of God’s rescue plan for the world. Just as God delivered the Israelites from slavery, he would also one day deliver the whole world from the slavery of sin. As a lamb atoned for the first born child, so the greatest lamb would atone for the world. I find so much hope in this. Just as he heard the cries of his people in Egypt. He hears our prayers in the midst of our everyday struggles. Whatever you are facing, friend, God sees you. Whether you are on the potty training struggle-bus, or you are in the depths of postpartum depression and can’t see the end. God sees you. You are not forgotten. He cares, and he is making a way out. As we’re going throughout our days, let us meditate on the hope we have in the ultimate deliverance through Christ.

1 thought on “A Toddler Devotion on Moses”