“And Jesus grew in wisdom and stature, and favor with God and men.”

This is such a small verse, and in many ways seems insignificant. It’s not really a story. It looks like more of a segue, really. In between two important stories, when Jesus was a child and Jesus was baptized. I would assume that most baby Bibles probably don’t even mention it. But ours does, and yes it uses it as more of a transition between the birth of Jesus and his ministry. However they had a page showing Jesus as a child and then Jesus as a man. And it says “and Jesus grew.” So I jumped all over it.

But why? Why was I so excited? Because hidden in that passage is the truth I want my girls to learn. 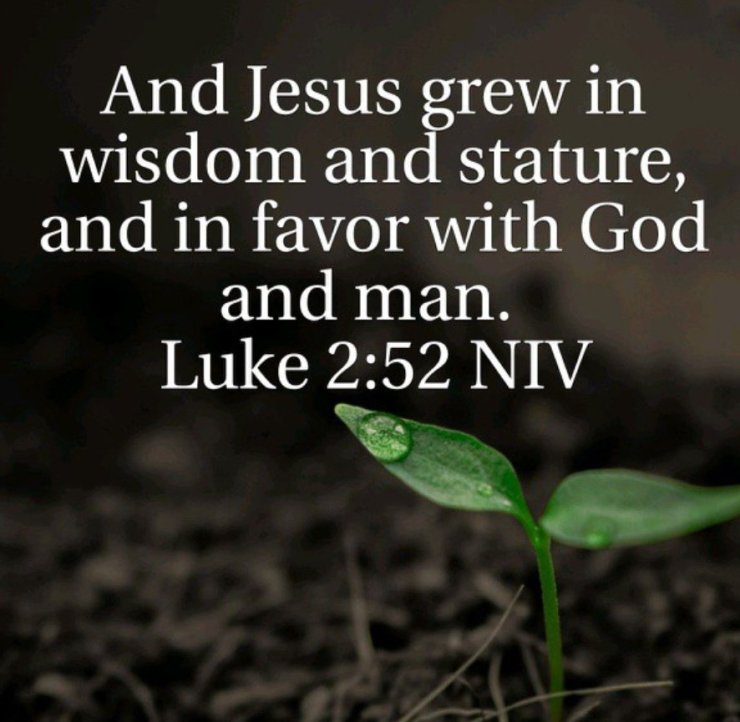 Jesus grew. He was born. He was a little boy. And he didn’t just start out performing miracles and raising dead guys. He had to grow up into that. Another way of looking at this verse could be through the lense of John 1:14

“And the Word became flesh and dwelt among us.”

God, in all his glory, took on human form and came to live with us. “Emmanuel. God with us.” (Matthew 1:23, paraphrased). There is the beauty of the Gospel in that text. That God came down as a baby and grew up to save us from our sins, so we could have life to the fullest.

Now, do I really expect my infant and toddler to grasp all that? No. Of course not, but I want them to know that page is important. I want them know that Jesus was like them. Jesus grew. So we read that page every day and did activities to go along with it.

We read the page in our baby Bible every day. We also sang the song and did the actions to the song And Jesus Grew by Steve Green. Another option could be reading the story of when Jesus got lost when his family went to Jerusalem (Luke 2:41-52). We have a new Baby bible with this story in it (The Beginner’s Bible), but the Baby Bible we were using at the time didn’t have this story, so we stuck with the original option. 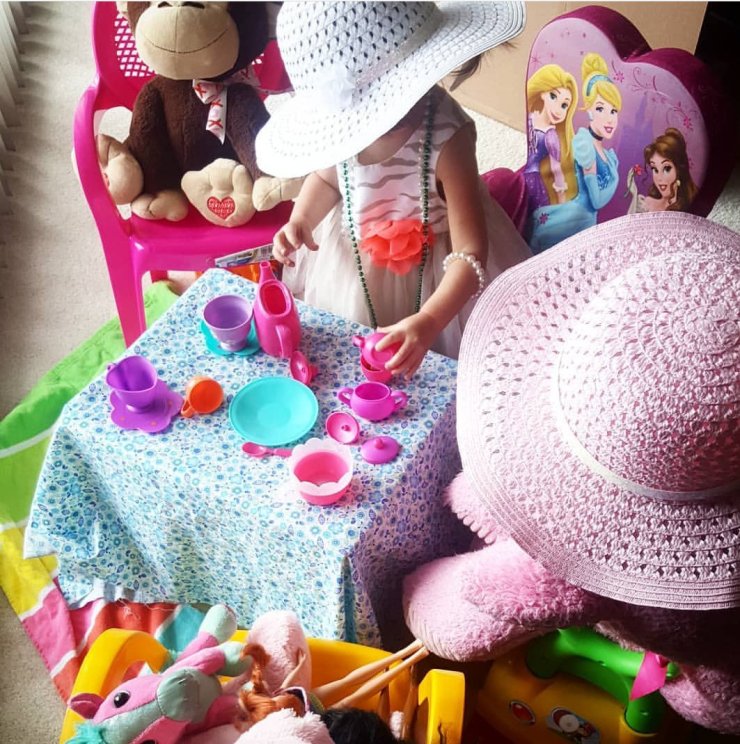 This week I tried to encourage a lot of imaginative play, like dress up, playing with the toy kitchen, etc. I did this, because it helps encourage the concept of growing up. Toddlers get to put on different roles they see adults play, test out new vocabulary, and try new skills. 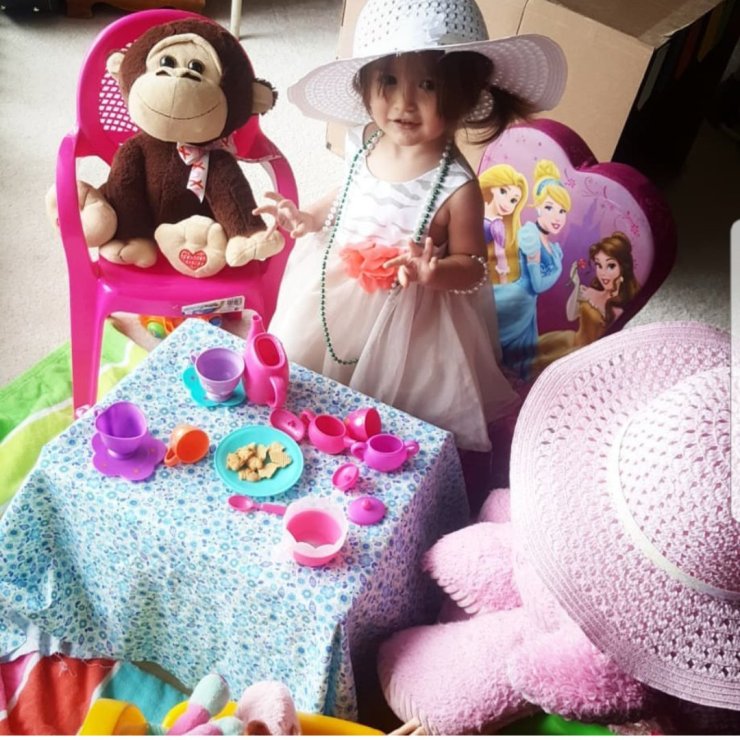 Obviously, we did a tea party, but for some other ideas check out: 8 Ways to Use a Cardboard Box for Imaginative Play.

Babies and toddlers love mirrors and they are so good for development. We used some mirror play to get little baby involved in our devotions. We set little baby Naomi in front of a mirror for tummy time (this encourages her to lift her head, self actualization, and tracking). Vale would look in the mirror, and talk to Naomi, encouraging her to lift her head. She would touch the mirror and point to her nose, then point to baby Naomi’s nose. Then her eyes, Naomi’s eyes. Both of their mouths, etc. 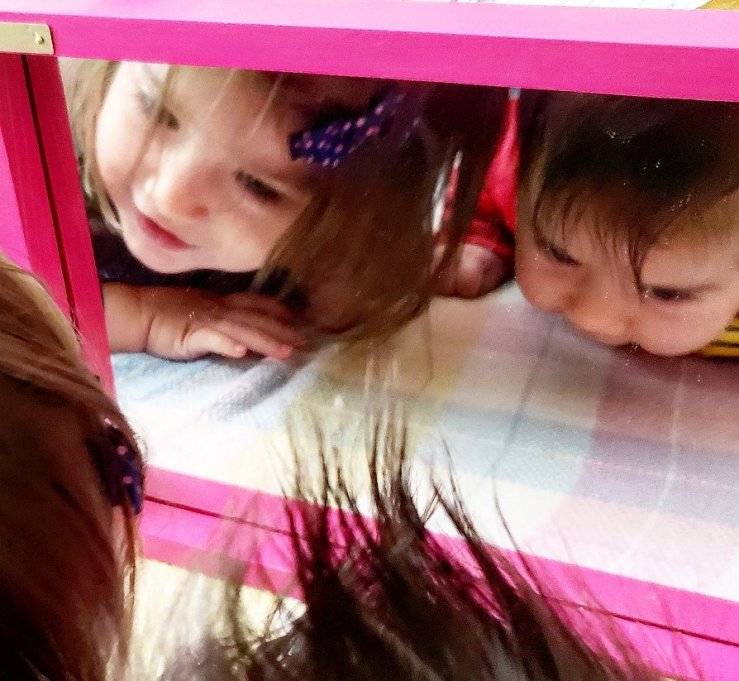 This was a great avenue for helping Vale safely play with Naomi. Vale loves Naomi , and loves to play with her. However throwing a blankie over Naomi’s face is not a safe way to play. Ahem. We’ve been on a learning curve. This was a safe activity for them to play together.

While they played, Vale and I talked about how little Naomi is. I made a point to say that she used to be as small as Naomi, but she grew.

We continued to talk about this theme through the week. When Naomi was first born, our pediatrician suggested pointing out to Vale the things she could do, but the baby can’t.

For example: “You can eat waffles, because you’re a big girl. Babies can’t eat waffles.”

This has totally helped us in our transition to a family of four. And we kept on talking about it this week to talk about growing up. 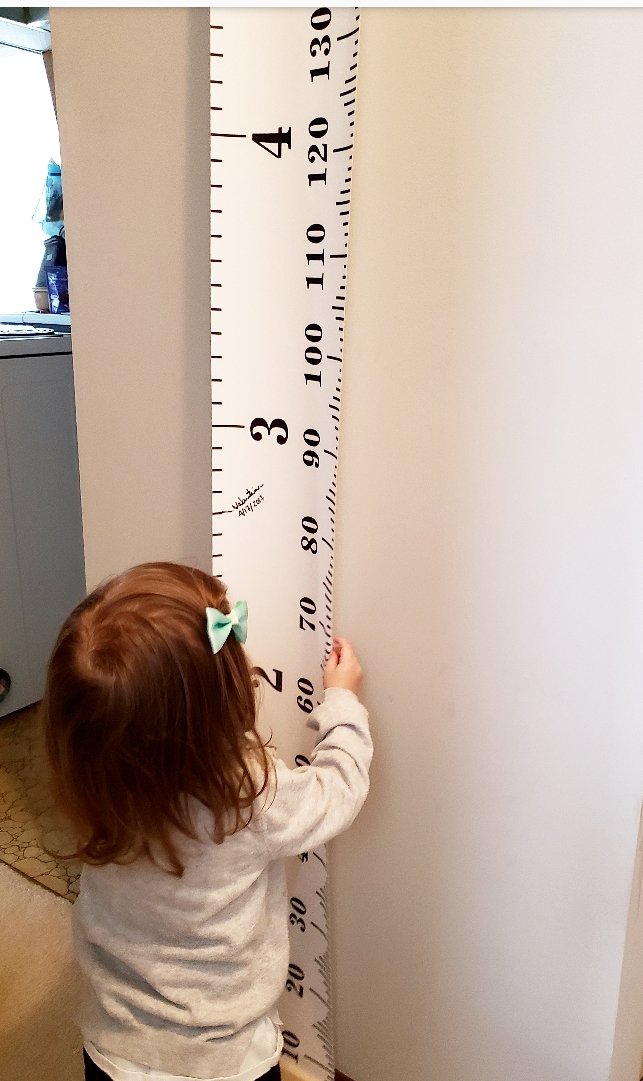 We also introduced a growth chart this week. This will be one of those on-going reminders we can use to talk about how much our babies are growing. Vale has been fascinated with the giant ruler on the wall and loves to touch it as we walk by. It was a little hard for her to grasp the concept of standing next to the wall so I could mark her height. But we got there, and she then was fascinated by the mark. Each time we passed it this week, we pointed to the mark and said “That’s how tall you are! You’re so big!”

This week we listened to And Jesus Grew by Steve Green. This is a song I grew up with and have memorized, so I kept on finding myself singing it throughout the week. The song is literally the verse. So as the kids learn it, they learn scripture.

We also looked to our friend, The Donut Man, and listened to Jesus Was A Child Like Me. Again, reinforcing the theme, that Jesus was like us.

Finally, to reinforce the idea of growing up, we watched Daniel Tiger: Season 5, Episode 1. This one is where the Tiger family is preparing for their new baby to arrive. They talk a lot about how Daniel is no longer a little baby. How he has grown. And now he can be a big helper in his family. 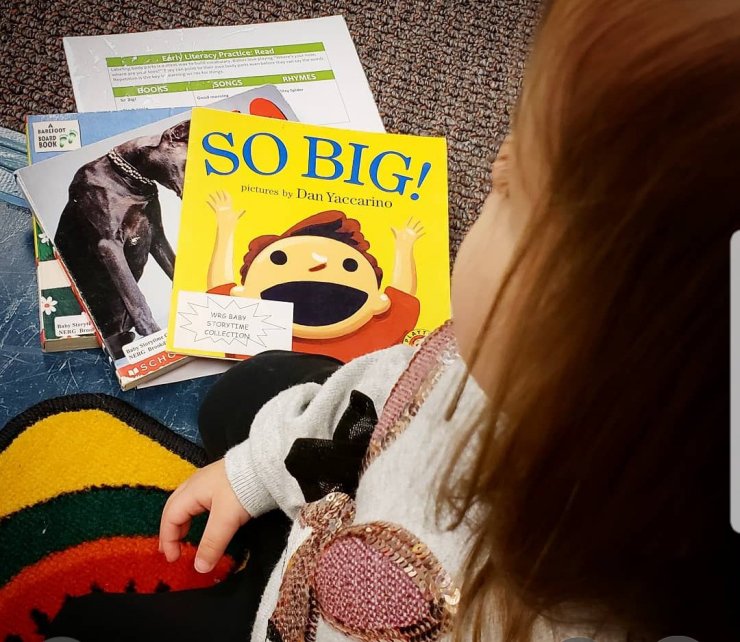 We also ended up taking an adventure that tied into our devotions. We went to the Southdale Library Baby Story Time, and just so happened to be doing a “growing” theme. This was not planned, but I was so excited their activities worked into our week. We sang “Head, Shoulders, Knees, and Toes.” Which they mentioned helps grow toddler vocabulary and build awareness of their growing bodies. Then we read:

So Big by Dan Yaccarino

Big and Little by Samantha Berger

How Big Is A Pig by Clare Beaton